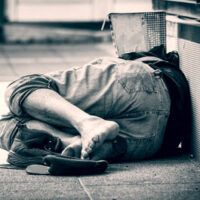 In December, by refusing to hear one state defense of regularly prosecuting the homeless for sleeping in public areas, the US Supreme Court essentially upheld a lower court’s finding that this practice violates the Constitution‘s ban on cruel and unusual punishment. In doing so, the Court essentially declared that individual constitutional rights trump cities’ claims that criminalizing this practice is reasonably necessary for public health and safety.

In this particular case, the city declared camping or lodging/sleeping in public to constitute disorderly conduct. They also claimed that it led to a number of crimes being committed, such as gang activity and drug dealing. As a result, several individuals who were prosecuted under the law sued the city, and in response, the Ninth Circuit found that the Eighth Amendment prohibits punishing the homeless for camping outside if there are not enough shelter beds available. Specifically, the court stated that the government cannot criminalize homeless people for sleeping outside under the premise that they had a choice. The court also pointed out that even though there are shelters that claim to never turn anyone away, people can still end up on the streets due to other limitations, such as limitations on the number of days that they can stay in a given shelter.

Every day, police officers arrest homeless individuals for engaging in life-sustaining activities such as sleeping or cooking in public and prosecutors decide to charge them with crimes when, in fact, homelessness is something that should be addressed with compassion. The issue also has a number of civil rights concerns associated it, as racial minorities represent a significant percentage of the homeless population. In addition, especially in our current climate, a number of individuals are forced into living on the streets because they are concerned that they could be deported if they seek out services from a shelter.

Unfortunately, the practice of criminalizing homelessness is widespread, including here in Florida: Not only does the state have a history of enforcing panhandling laws, but the courts have also struck down a number of individual cities’ laws, such as prohibiting homeless individual from sleeping in any public place when they have nowhere else to go. Florida also has a history of passing anti-loitering laws that have been struck down by the Supreme Court because they place “almost unfettered discretion in the hands of the police.” The police have even arrested individuals for distributing food to the homeless without having a permit.

If You’ve Been Accused of a Crime, Contact Our Attorney to Find Out If Your Rights Were Violated

If you face prosecution for an activity that is protected by your constitutional rights here in Florida, contact our experienced West Palm Beach criminal attorney at the office of William Wallshein, P.A. today to find out how we can help.