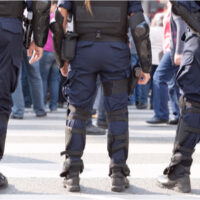 We’ve previously discussed qualified immunity, the legal doctrine essentially created by the US Supreme Court which shields government officials – typically law enforcement – from accountability after using excessive force and violating a defendant’s constitutional rights unless there is an already-existing judicial decision with substantially similar facts finding that an officer engaged in illegal activity. The issue most recently came to light after one police officer killed George Floyd, kneeling on his neck for more than eight minutes while he was in the process of arresting him, leading to protests erupting all over the country over police brutality.

As the doctrine protects police and others from civil lawsuits, it affects the entire field of criminal defense in terms of how officers behave when it comes to such practices as arrests and search and seizure. For example, if law enforcement officers discover evidence via an illegal seizure, prosecutors may not be able to use the evidence they gather against you in court. However, if the court holds that no seizure occurred because of the circumstances, where the officers were entitled to qualified immunity, this negates a Fourth Amendment excessive force violation, and, as a result, any evidence discovered may be used against you in court. By continually finding that officers are entitled to qualified immunity over and over again, many would argue that the police feel more and more empowered to disregard individuals’ rights in their pursuit of criminal suspects, which leads to more arrests, illegal seizure of evidence, and wrongful convictions.

Recently, the US Supreme Court declined to hear any of the nine pending cases involving qualified immunity brought before it, missing an opportunity to repeal what many have aptly described as a doctrine that not only shields police from accountability and creates significant injustice in the criminal system, but was largely an invention of its own creation with no basis in statutory or constitutional texts, leaving the doctrine’s fate up to Congress.

To this end, in June, several Congress members introduced the Ending Qualified Immunity Act, which seeks to end the doctrine of qualified immunity, codifying that it does not provide grounds for the defense of officers that violate the law, as well as explicitly stating that it was invented by the Supreme Court and does not provide officers that brutalize or otherwise violate someone’s civil rights with defense or immunity. The legislation is currently sponsored by Democrats, Libertarians, and Republicans.

If You Are Facing Criminal Charges in Florida, Contact an Experienced Florida Criminal Defense Attorney

If you or a loved one has been arrested and/or charged with a crime, you may have had your constitutional rights violated in the process, and it is imperative that you retain the assistance of an experienced criminal defense attorney so that your rights are defended and you are treated fairly. Contact West Palm Beach criminal attorney William Wallshein today or a free consultation to find out more about your options and our defense services.