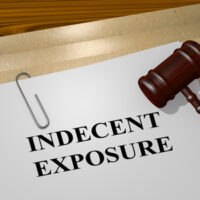 Florida House Bill 675, introduced by Representative Amy Mercado, is an update to Florida indecent exposure laws. It expands the definition to encompass any display of nudity in a public setting. HB 675 also makes certain acts of exposure a felony and allows the police to arrest a suspect without a warrant and without witness to the lewd act. The bill has already passed and been signed into law by the governor, opponents argued the bill unfairly targets vagrants and the mentally ill. This is because often these populations encounter law enforcement and don’t have the capacity to understand their behavior is wrong. The bill is targeted to punish repeat offenders and in some cases, tourists breaking the law. Many people travel to South Florida to vacation and let their hair down. Unfortunately, bad influence, intoxication and inebriation can sometimes lead us to make decisions we might regret, like exposing ourselves in public.

Indecent exposure is defined as the unlawful exposure of the sexual organs. It is also illegal to expose sexual organs in private if doing so for exhibition or to expose themselves for another person. For example, standing on the balcony of your hotel room naked in view of people below would qualify as indecent exposure. The first violation of the statute is a first degree misdemeanor.  Since HB 625 passed, the new law has been added to Florida Statute §800.03. The statute reads that a second or subsequent violation qualifies as a third-degree felony. A third degree felony is punishable up to a five year prison term. Fla. Stat. §775.082 (2020).

In 2019 alone, over 179 people were arrested in Florida for indecent exposure. Exposure to a minor under 16 is classified as lewd and lascivious exhibition, a second degree felony punishable for up to 15 years in prison as well as a fine not to exceed $10,000 dollars. Depending on the circumstances of exposure, the Defendant might also be charged with lewd conduct. Making gestures, grabbing at the genitals or other lewd conduct could garner a 5-year prison sentence. Any behavior defined under the statute is now penalized to a higher degree, and officers have more leeway in making an arrest because they no longer need a warrant. In some cases a victim or witness testimony is enough to make an arrest. Therefore it’s critical to take action if you have been charged with any of the crimes listed.

HB 625 states that penalties for indecent exposure increase to a third-degree felony. This means if convicted, defendants could be sentenced up to years in prison and/or pay in fines. Depending o the circumstance and location of the incident, the defendant may also be required to register as a sex offender. Along with severe stigma and ostracization, registered sex offenders are barred from various forms of employment, enrolling in some higher education institutions, or visiting and picking their children up from school.

If you are facing criminal charges  for indecent exposure or similar crimes, you should obtain counsel as soon as possible. West Palm Beach criminal lawyer William Wallshein has over 38 years of experience defending clients for various crimes including indecent exposure, and he can help you too. Do not delay because your freedom, reputation and career may be in jeopardy. Call to schedule a free consultation today.