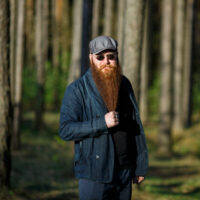 The Internet has always been a place where weirdos go to be weird, often with the help of pseudonyms, but the nature of that weirdness has changed over the years.  In the old days, people turned to bulletin board systems and online chat rooms to nerd out with friends in other time zones about their unusual hobbies, such as, for example, growing their facial hair to extraordinary lengths.  In more recent years, though, people have turned to the Internet to buy and sell products that are not legal in any jurisdiction, paying for them with currencies that are not tied to any legal system.  Until he got caught, Gal Vallerius had the best of both worlds, the oddball hobby and the international circle of like minded friends on the one hand, and on the other, a steady stream of cryptocurrency transactions in exchange for controlled substances.  Even if you do not cut as recognizable a profile as the beardsman formerly known as Oxymonster, a West Palm Beach drug offenses lawyer when your drug operation goes pear-shaped.

For years, Gal Vallerius grew his beard and his nest egg while he spent his days and nights accessing the dark web from his home in northern France.  Like most millennials, he had accounts on Twitter and Instagram, where he posted pictures of his abundant chin mane and exchanged friendly messages in English and French.  Meanwhile, on the websites you can only access if you type the URL verbatim in its entirety, no one knew his real name or his legendary beard, but he was no less a towering figure.  He was known as Oxymonster, and on a dark web site called Dream Network, he sold controlled substances such as oxycodone and Ritalin.

Dream Network recognized his talents and promoted him to an administrator role.  Law enforcement also took notice of the indefatigable Oxymonster when he shipped pills to two buyers in Miami who turned out to be undercover agents.  An investigation revealed that Vallerius’s tweets and Instagram posts had some linguistic idiosyncrasies in common with Oxymonster’s Dream Network dispatches.  Specifically, he switched freely between French and English and tended to end sentences with double exclamation points and to conclude communications with the salutation “cheers.”

The authorities did not have to travel to France to catch Vallerius, because he came to them.  In August 2017, he traveled to the United States, intending to compete in the World Beard and Moustache Championships in Austin, Texas.  When his plane landed in Atlanta, he was arrested immediately.  Vallerius pleaded guilty to drug trafficking, and in 2018, he received a sentence of 20 years in prison, which was only half the length of the maximum prison term he could have received.  Since he is a citizen of France, Israel, and the United Kingdom, he may serve part of his sentence in one or more of those countries.

A Palm Beach County criminal defense lawyer can help you if you are facing criminal charges for drug trafficking, no matter how much or how little facial hair you have.  Contact William Wallshein P.A. in West Palm Beach Florida to discuss your case.