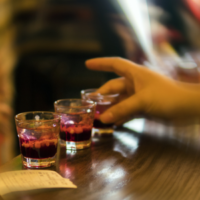 If you were charged with a crime and are confused about your next steps, call Attorney William Wallshein for guidance.

What is Disorderly Intoxication?

Florida statute defines disorderly intoxication as drunkenness in public that endangers the life and safety of another person or property. Disorderly intoxication also includes the imbibing of alcoholic beverages in a public area and causing a public disturbance. So what qualifies as a public disturbance? And if someone is drinking in the booth of a private restaurant and is a paying customer, is the private restaurant considered “public”? Disorderly conduct in Florida means the defendant allegedly disturbs the peace and quiet of the public, maybe by shouting at a waitress or acting belligerent, or challenging someone to a fight. Similarly, if someone was so drunk that they fell on the floor or landed on someone, injuring them, it’s possible they could be arrested for disorderly intoxication. Fighting or causing excessively loud noise after imbibing alcoholic beverages may also be probable cause for an officer to arrest a defendant for disorderly intoxication.

What are the Penalties and Defenses?

Conviction of disorderly intoxication in Florida is considered a second degree misdemeanor. The defendant could be sentenced to up to 60 days in jail in addition to a $500 fine. This could be in addition to other charges stemming from the same event, such as disturbing the peace or assault of another restaurant patron, and even a misdemeanor conviction can carry serious consequences. Florida statute indicates that instead of arresting a disorderly or drunk patron, a police officer has discretion to drive that patron home or to a safe place. In addition, if the prosecution is unable to prove the defendant’s alleged inebriated state, or they are unable to prove that the defendant caused a true disturbance warranting an arrest, the defense could move to have the charges dismissed. Conduct that appears offensive or disorderly to one person may not offend another, so charges for this particular crime are subjective and often determinate upon the circumstances leading to the arrest.

If you or a loved one were charged with disorderly intoxication, disturbing the peace, or a similar crime, it is crucial that you retain legal counsel and prepare a defense against the charges. While you may simply want to pay a fine and put the event behind you, criminal charges will go on your permanent record. Charges involving alcohol or drugs can be especially stigmatizing and may affect your ability to obtain housing, future employment, and your reputation with friends and the community. Don’t be another statistic. If retained, West Palm Beach criminal attorney William Wallshein will go to work to defend you and argue that charges may be dismissed in your case, depending on the circumstances. Call today to schedule a consultation and review your options.