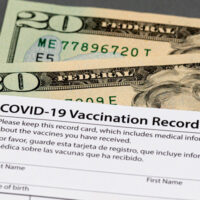 As COVID-19 cases continue to climb to historic levels in Florida, one state lawmaker is proposing enhanced criminal charges for residents and visitors who attempt to present a fraudulent COVID-19 vaccination card. Florida House Bill 47 would make carrying or manufacturing a fake COVID-19 vaccination record card a felony. If it passes, the bill would go into effect as law in October of 2022. Several states are proposing enhanced penalties for visitors and citizens caught utilizing a fake vaccine card or manufacturing fake vaccination records cards, and federal administrative agencies like the FBI and DOJ are diverting resources to investigation.

What is Florida House Bill 47?

Democratic Congressman Grieco proposed the bill in August of 2021. The language of HB 47 indicates that anyone who forges, counterfeits, alters or possesses a vaccine certification record card with the intent to defraud would be charged with a felony in the third degree. In Florida, a felony in the third degree is punishable up to five years in prison in addition to probation and fines. Because presenting a fake COVID-19 vaccination card is already a federal crime, if a defendant was arrested on federal property (such as an airport) usually the federal government would have jurisdiction in pursuing prosecution. Creating or carrying a phony vaccination card is a federal crime because the vaccine record card contains the seal of the CDC and distributed by the U.S. Government. Because the cards bear an official government agency seal, a defendant caught using or manufacturing a fake card for the purpose of defrauding an official verifying their vaccination status can also be charged with unauthorized use of an official government agency seal.

In addition, there are many other unintended consequences for presenting a fake vaccine card. The person who has not been vaccinated may be an asymptomatic carrier of the virus, potentially infecting others. If the person does so to comply with procedural requirements for work or school, they undermine efforts from administrators to create a safe environment for students, staff, coworkers and guests. Travelling overseas or via air travel with a fake vaccine card can also present issues for the holder. If caught, they may be barred from that airport or from utilizing that airline. Their honesty and reputation is on the line, and they may suffer educational, professional and social consequences for choosing to carry a fake vaccine card. For manufacturers of fake vaccine record cards, they eradicate the work being done by first responders, essential workers, healthcare staff and government agencies working to restore the health of our nation.  While the vaccine is not mandated on a national level, lying about vaccination status is a crime and it bears certain consequences.

We are living in unprecedented times. Many Americans thought the worst was over this summer when the CDC lifted mask guidelines, but as the highly contagious Delta variant continues to spread, Americans must remain vigilant. The U.S. Government will not enforce a vaccine mandate, but illegally using a fake vaccine record card or being untruthful about vaccination status is a crime.  If you have been accused of lying about your vaccination status or violating a crime regarding your vaccine card, you need legal assistance. William Wallshein is an experienced West Palm Beach criminal defense attorney who works tirelessly for his clients no matter what the circumstances may be. Call today to schedule a free consultation.