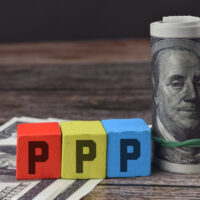 Now that winter travel is in full swing and Florida’s beaches are packed with locals and tourists, it is hard to believe that it was only two-and-a-half years ago that COVID restrictions were forcing businesses to close and the owners of businesses of all sizes were panicking about how they could afford to pay their employees.  Business owners scrambled to apply for funding through the Paycheck Protection Program (PPP).  Meanwhile, the Small Business Administration (SBA) scrambled to approve the loan applications, and banks scrambled to disburse the funds, and a lot of oversight got lost in the shuffle.  Soon, stories began to appear about businesses that were doing just fine receiving large sums of money and about the proprietors of entirely fictitious businesses using their PPP funds to buy luxury cars, personal watercraft, and real estate.  More than two years after the SBA first began reviewing PPP applications, the PPP fraud cases are still going on in criminal court, and a new indictment has just been issued for two men from Florida who allegedly greatly inflated the financial needs of their nonprofit organization on a PPP application.  If you are facing charges for financial crimes related to the desperate days of the pandemic, contact a West Palm Beach white collar crime lawyer.

Father and Son Allegedly Spent $8 Million on Personal Purchases, Not on a Charitable Organization

In April 2020, Evan Edwards and his son Joshua Edwards submitted a PPP loan application for their nonprofit organization, Aslan International Ministry, A Christian charitable organization.  They claimed that Aslan employed more than 400 workers and that its monthly payroll expenses exceeded $2 million.  The loan got approved, and over the next several months, they received $8.4 million.  One of the first things they did was pay an $868,250 down payment on a mansion in Orlando.  They also allegedly moved the remaining money to various accounts to make it harder to trace.

An investigation eventually revealed apparent inconsistencies in the information on the loan application.  For example, they listed a certain accountant as being currently employed with the company, but investigators found out that the accountant retired in 2017, and by the time Evan and Joshua Edwards filed the application, he was suffering from dementia and unable to work.

In December 2022, Evan Edwards, 64, and Joshua Edwards, 30, were charged with bank fraud and wire fraud; they are also facing charges for visa fraud related to allegedly false statements they made on their U.S. green card applications in 2022.  Mary Jane Edwards, who is Evan’s wife and Joshua’s mother, and Joy Edwards, who is Evan’s daughter and Joshua’s sister, are not facing criminal charges related to their family members’ alleged criminal activities.