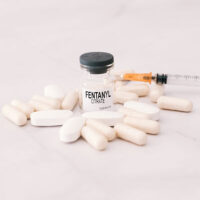 Fentanyl, a synthetic opioid approximately 100 times as strong as morphine and 50 times as strong as heroin, causes more drug overdose deaths than any other controlled substance.  It was originally intended for pain management in cancer patients and in emergency situations where injured patients are being transported to hospitals for treatment.  Most of the fentanyl on the streets in Florida today has been manufactured illegally and trafficked into Florida from elsewhere, sometimes through online purchases.  Fentanyl is a Schedule II controlled substance, making it legally similar to cocaine, Adderall, hydrocodone, and many other drugs, but its effects are not similar.  Of the approximately 100,000 drug overdose deaths that occurred in the United States in 2021, approximately two thirds involved fentanyl.  Therefore, Florida has recently enacted a law that specifically targets fentanyl trafficking.  If you are facing criminal charges related to the possession or sale of fentanyl, contact a West Palm Beach drug offenses lawyer.

Critics of the new law argue that it does not address the fact that most people who suffer fentanyl overdoses are not aware that the drugs they are taking contain fentanyl.  They think that the powder they bought is cocaine, methamphetamine, or heroin or that the pills that their drug dealer bought online are Adderall or oxycodone.  Most people who buy or sell modest quantities of drugs also don’t know whether the mixture contains fentanyl.

A Palm Beach County criminal defense lawyer can help you if you are facing criminal charges for possession of fentanyl or fentanyl test strips.  Contact William Wallshein P.A. in West Palm Beach Florida to discuss your case.