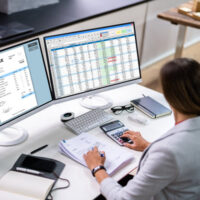 Identity theft does not require enormous financial resources or highly specialized computer skills.  Many defendants in identity theft cases had access to their victims’ identifying information or financial data in the context of their job duties.  Whether you hacked into a computer network or simply jotted down customers’ credit card numbers from your office computer, identity theft is a crime with serious penalties.  A medical billing clerk from Lake County pleaded guilty to aggravated identity theft after stealing and selling information from patients’ files to make ends meet.  If you are facing criminal charges for a low-level financial crime, contact a West Palm Beach white collar crime lawyer.

Stacey Hendricks had more financial responsibilities than her job as a medical billing clerk in Mount Dora could afford.  Since her daughter had died in childbirth and her son was serving a prison sentence, Hendricks was the sole source of financial support for her three grandchildren.  Like most people who work full-time but struggle to make ends meet, Hendricks searched online for gigs to make extra money.  Eventually, she was contacted by co-conspirators who offered to pay her for taking pictures of patients’ identifying information on their medical charts and sending the snapshots to the co-conspirators.

While trying to improve her situation, Hendricks tried to avoid victimizing financially vulnerable patients; she later told investigators that she only photographed the information of patients who had good credit.  The images she captured were in high demand, and each one yielded her $100.  She spent most of the money on household bills, but she was able to use the money to buy a car from Carvana.  As is often the case with shady gigs, Hendricks did not know the identities of the people who were buying the images from her.  The buyers of three images turned out to be undercover agents, and by late 2019, there was enough evidence for a search of Hendricks’s house and car, during which detectives found more than 100 stolen images.

Hendricks was charged with 17 federal crimes, but she cooperated with investigators from the beginning.  She admitted to the investigators that she had stolen and sold the images because she needed money, and she tried to avoid causing excessive financial harm to victims.  She returned the car to Carvana.  In doing this, she was able to get a plea deal that reduced her charges to the point that she only had to spend four years in prison.

Hendricks, who was 49 at the time, pleaded guilty to wire fraud in January 2020 and began serving her sentence in May of that year.  Unless she becomes eligible for parole sooner, she will be back at home with her grandchildren in 2024.

A Palm Beach County criminal defense lawyer can help you if you are facing criminal charges for a financial crime such as wire fraud or identity theft.  Contact William Wallshein P.A. in West Palm Beach Florida to discuss your case.