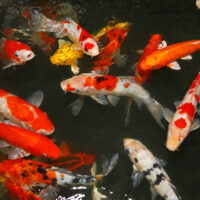 Florida has never stopped trying to live up to its reputation as a fountain of youth.  The people of Aventura, in particular, are famous for their longevity, but believe it or not, Floridians are not the longest-lived creatures on earth.  For some species of tortoise, supercentenarians are a dime a dozen.  Lonesome George lived a lonely existence for more than 100 years on the Galapagos Islands, while Timothy the tortoise died in 2004 after a 140-year retirement from a career as a ship’s mascot for the British Royal Navy, making her the last survivor of the Crimean War.  The old folks of Florida have nothing on Hanako the koi fish, however.  Hanako was 229 years old when she died in Japan in 1977.  If you ever needed proof that koi are not just really big goldfish, consider that the average koi lives between 15 and 40 years in captivity, while you are lucky if your pet goldfish lasts a few days.  A South Florida man is facing charges for an attack on a koi pond, but, koi being resilient, some of the fish survived.  If you are facing criminal charges for crimes against fish or any other kind of  “only in Florida” incident, contact a West Palm Beach misdemeanor lawyer.

Something Fishy at the Aventura Mall

The enormous Christmas tree and giant menorah are a sight for sore eyes, to be sure, but the Aventura Mall is gorgeous year-round; if you doubt this, look no farther than its koi pond, which has a koi population of about 50 fish.  Earlier this month, Canin Sanders stopped at the koi pond and allegedly poured alcohol, bleach, and soap into the water.  As the fish floated to the surface, witnesses saw Sanders petting them.  Meanwhile, approximately half of the fish had died, but the mall’s cleaning staff was able to rescue the others.  The cost to replace the fish that died, plus veterinary care for the surviving fish and cleaning the pond to make it habitable again, is about $25,000.

When mall security guards arrived, Sanders, 30, walked away, even though he appeared to know that the security guards were pursuing him.  The security guards contacted police, who stopped Sanders outside the Zara store on the first floor of the mall.  Sanders is facing charges for animal cruelty, resisting arrest without violence, and criminal mischief.  Sanders’ mother told the judge that her son suffers from schizophrenia and is seeking treatment.  While the case is pending, the judge has ordered Sanders to stay away from the Aventura Mall.  He is also not allowed to go to the Shops at Bal Harbour, since it also has a koi pond.