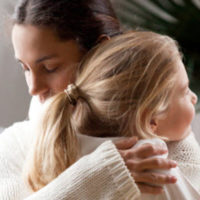 Recently in West Palm Beach, a mother of three children was arrested and charged with child abandonment after she forcibly removed her daughter from the family vehicle at a gas station at 5 am, and then abandoned her 3 year old son at a Publix grocery store several hours later. Police released an APB describing the suspect’s vehicle and after it was spotted, apprehended her in Palm Beach around mid-day on March 1. Previously, she kicked the children’s father out of the moving car on the highway in Louisiana. While it’s not clear from the facts if the couple was married, the fact pattern brings up an important discussion about child abuse. Sometimes parents and couples file for divorce because of an abusive partner or parent. But what happens if you suspect a co-parent of abuse after divorce is final?

If you suspect your children are in an unsafe environment when the other parent has custody, you need to notify the police, call a domestic violence shelter or reach out to someone in child and family services in addition to contacting a lawyer as soon as possible. Even if your suspicion of child abuse is incorrect, doing nothing could actually threaten your custody. It’s also important that you teach your kids what is right and wrong behavior and that you are a safe person to trust and confide in, even if it’s something difficult or painful to discuss. You might be tempted to confront your spouse. If you think it’s safe for you to do so and a verbal discussion won’t escalate, it’s an option, but don’t discuss these issues in front of your shared children or alone. Bring a friend or a family member. If physical or sexual abuse is suspected, you need to call the police and file a report. They will launch an investigation and if they have probable cause, will remove the children from your ex-spouse/co-parent’s home.

You can also obtain a protective order for your children to keep the other parent away for a temporary basis until custody arrangements are permanently modified. To obtain a protective order, you need to establish to the court that you’re a person qualifying for relief from abuse. You can also file on behalf of your children. The respondent(defendant) has the right to attend the hearing but ultimately the court will make a decision in the best interest of the children. The judge can grant temporary emergency custody to you and require the defendant/respondent to stay away from your home, work, school or any other area you state, as well as turn in weapons and continue to provide financial support if necessary.

Modifying a custody agreement or removing custody rights from an abusive parent requires court intervention. If you think modifying the order is the best solution, Attorney Wallshein can prepare paperwork to be filed with the courts. Once a hearing is scheduled, you have to establish to the court that it is in the best interest of the children that you have primary legal and physical custody, because the other parent is unsafe, violent or abusive. Modification may also affect an existing child support order. If the court finds that the other parent is physically, sexually or verbally abusive, is unsafe due to drug or alcohol abuse or otherwise unfit to have custody of the children, the court can modify the current order. The court can also order the defendant to attend counseling, family mediation courses or to observe supervised visitation with a court liaison.

If you or someone you know is concerned for a child’s welfare, suspect child abuse or need assistance or resources, contact West Palm Beach family attorney William Wallshein. Mr. Wallshein possesses decades of experience handling family and criminal cases. He understands the sensitivity of these issues and will work as your advocate to uncover the truth and protect your children from harm. Contact his office today to schedule a consultation and get the help you need.