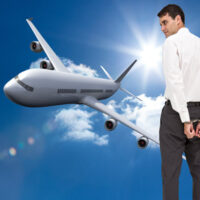 The Federal Aviation Administration has requested airports provide more support for dealing with uncooperative passengers, including curbing the sale of alcohol in airports. This request comes after a deluge of increased reports of mid-air violence and assault from crazed passengers towards other guests, flight attendants and staff. Most recently, Frontier airlines flight attendants were forced to duct tape a passenger to his seat after he repeatedly groped them and became belligerent. The attendants are now on paid leave as charges are forthcoming for the passenger. What happens to defendants who are arrested mid-air?

Allegedly committing a crime midair or midflight on an airplane can elevate charges to the jurisdiction of a federal court. This is because the federal government has special maritime jurisdiction over air traffic. In the case of the instant defendant, he may be facing charges for federal assault of the flight attendants and passengers because of unwanted touching. He may also be facing enhanced charges for sexual battery, because he allegedly groped multiple victims. Sexual assault on an airplane is a felony and if convicted the defendant would serve years in federal lockup. Federal penalties for crimes are almost always lengthier and there is no possibility for parole. In addition, defendants charged with a misdemeanor are not eligible to request a jury trial. Instead, they are arraigned by a federal magistrate who would also hear the case and determine sentencing if the defendant were convicted.

Other Penalties for Airline and Airport Arrests

If a defendant is arrested midflight or on airport grounds, they may face additional consequences or their alleged actions. For example, even if a defendant is found not guilty, the airport has discretion to ban the defendant from stepping foot on airport grounds or ever frequenting the airline again regardless of location. This may have serious professional implications for defendants that must travel for work and for the defendant who simply enjoys recreational travel. A federal conviction can also impact current employment and future employment prospects. It is also plain embarrassing, as stories of unruly airline passengers almost always make the news. Even if a passenger is not arrested, they may also be fined by the Federal Aviation Administration up to $25,000 for interfering with a crew member.

Airport arrests are scary. A defendant can be banned from an airport or from ever frequenting that airline again. They may also be facing criminal federal charges due to the location of the arrest and endangering other passengers mid -air. These charges are serious, and the consequences are real. It’s crucial that defendants seek the guidance of an experienced criminal defense attorney. West Palm Beach criminal attorney William Wallshein has more than three decades of experience serving criminal defendants throughout Florida for federal and state offenses. He understands what is at stake and he will work hard to protect your rights. Call today to schedule a consultation.