What Is Criminal Mischief In Florida? 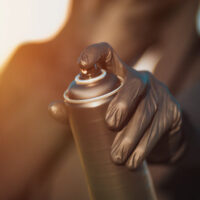 Recently a Florida woman was arrested for criminal mischief after she and her friend engaged in intimate relations in a restaurant bathroom, causing the bathroom sink to detach from the wall. The restaurant owner pressed charges but it is not clear if the friend was also charged with a crime. What exactly is criminal mischief? What are the penalties in Florida?

Florida Statute 806.13 defines criminal mischief as willfully and maliciously damaging the real or personal property of another. It includes acts of vandalism or graffiti tagging. Fla Stat. § 806.13 (2021). The statute indicates that any one in violation of it may be required to pay damages to the victim for causing the offense, which is a form of restitution. This is in addition to fines and penalties associated with the conviction.

Other Penalties for Criminal Mischief

If a defendant defaces historic property, religious property, or a memorial they are charged with a third-degree felony. A convicted defendant can be compelled to pay restitution to the property owner in addition to serving up to one year in jail for their offense. In addition, if a defendant was previously convicted of misdemeanor criminal mischief, and is subsequently convicted of another offense, the new charges can be elevated to a third-degree felony. See Fla. Stat. § 806.13(4). A defendant can also be charged with a third-degree felony if the damages to the public or private property exceed $1,000, or if damages affected critical infrastructure, such as damages to gas or electric lines, loss of water supply, or damages to communication (e.g. phone lines or CATV lines).

What about Graffiti Tagging?

For causing damage with graffiti, a convicted defendant is required to pay a fine of $250 for a first offense, $500 for a second offense, and no less than $1000 for a third or subsequent offense. Defendants convicted of graffiti tagging are also required to serve 40 hours of community service. The statute indicates that some defendants may be required to spend up to 100 hours of community service removing graffiti. If a minor is convicted of criminal mischief, their parent or legal guardian is also liable to pay a fine for damages. A judge can waive the fine if circumstances indicate that the minor does not have the means to pay. In addition, a minor convicted of graffiti tagging may have to wait an additional year to obtain his or her driver’s license.

If your child has been charged with criminal mischief in Florida, they should take it very seriously. While it might seem like a slap on the wrist, depending on the value of property damaged and the circumstances of the crime, a person could be charged with a felony. Even a misdemeanor can have negative consequences on a defendant’s future prospects, education and career endeavors. If retained, West Palm Beach juvenile crimes lawyer Wallshein will do everything in his power to dismiss or lower charges against you or your child. He understands your situation and will work to find a solution you can live with. Call today to schedule a free consultation.