When Does A Dietary Supplement Become An Illegal Drug? 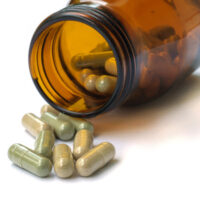 Most of the items you find at gas station convenience stores where you stop in the middle of the night on road trips are the same as products you would find at a supermarket in the daytime, such as sunflower seeds, candy bars, potato chips, soda, and bottled coffee drinks.  The pills in the locked case at the front look a bit shady, though.  If they are really over-the-counter drugs or dietary supplements, then why aren’t they on the shelf with Tylenol, Advil, and vitamin C?  The names suggest that they are street drugs in all but name; herbal ecstasy probably has more in common with MDMA than it does with garden variety parsley and thyme.  One such substance that has been sold over the counter despite never gaining FDA approval is tianeptine, also known as gas station heroin, and it has been implicated in a recent series of overdoses in Alabama.  If you are facing criminal charges for possession of tianeptine or other unapproved substances, contact a West Palm Beach drug offenses lawyer.

How Is “Gas Station Heroin” Different From Real Heroin?

A paper published by researchers at the Icahn School of Medicine at Mount Sinai in New York classified tianeptine as a “novel synthetic opioid,” but it is not especially new.  It was first synthesized in France in the 1960s, with the goal of developing an antidepressant that had fewer side effects than the tricyclic antidepressants that were available at the time.  It has been prescribed as an antidepressant in many countries, and researchers have even investigated its potential to treat other medical conditions, such as fibromyalgia and attention deficit hyperactivity disorder.

Studies took place in the United States in preparation for seeking FDA approval for tianeptine, but researchers abandoned these efforts in 2012, and tianeptine has never received FDA approval.  This means that it is illegal to sell it in the United States, whether as a prescription drug or a nutritional supplement.  The trouble with tianeptine is that its effects mimic those of opioids, including euphoria when taken at high doses; therefore, the abuse potential for tianeptine is considerable.  Even worse, the symptoms of tianeptine withdrawal are similar to the symptoms of opioid withdrawal.  For these reasons, some other countries have banned tianeptine, and others have placed restrictions on its use, even while permitting its medical use in certain circumstances.

Just because you might be able to find tianeptine for sale over the counter or online, this does not mean that it is legal.  If you are caught with tianeptine in your possession, you should hire a drug crimes defense lawyer.